Joe started his career in the nursery industry at Plants of the Wild, Tekoa, WA in 1987, then moved to Hash Tree Farm until the summer of 1990, when he started the container division of Jayker Nursery.  Joe worked for Jayker Nursery as grower, General Manager and CEO until stepping down in 2009 to run the growing division again.

Joe has been actively involved in the INLA serving on the Certification Committee for many years and also as a member of the Boise State Advisory Board for horticulture.

Carla began her career at Hillside Nursery in 1987, then went to work for Jayker Nursery as Sales and Marketing Manager until 1993.  She then became a Manufacturers Representative for nursery, gift and home products until 2005, when she tried her hand at a Chocolate Company as National Sales Manager, which gave her an opportunity to eat chocolate every single day…  Finally coming full circle back to Jayker in 2006, where she has been Sales and Marketing Manager for the past several years.

Joe has an interesting hobby raising turkeys, chickens, rabbits and other critters, when he’s not building stone walls around the yard.  Carla helps in raising a large garden and loves to cook and sew and is learning to play the piano. 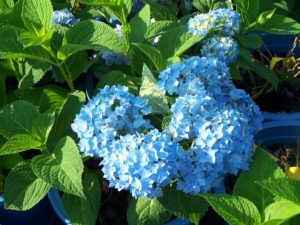 Carla loves to garden, and these beautiful hydrangeas are on display every year 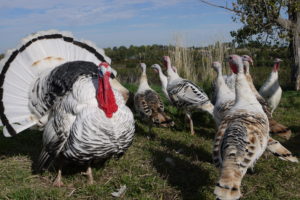 Joe enjoys spending his free time raising a variety of critters, including these heritage turkeys

Theme by Anders Noren — Up ↑