A tall, straight-trunked, narrow crowned pine that is native to the Rocky and Cascade-Sierra Mountain Ranges.  Twisted needles are in bundles of two and they vary in color between yellow-green and dark green.  Lodgepoles will grow in a wide variety of soils.

Slow growing, conical shape with a high tolerance for drought.  Short, thick, exceptionally blue-green needles are in pairs.  Their pine nuts are considered a real delicacy.  Native to the Rocky Mountains and does well in a low water landscape.

Vanderwolf Pines have a narrow pyramidal shape with long, twisted, silvery, blue-green foliage in bundles of 5.  A vigorous growing specimen plant or screen. 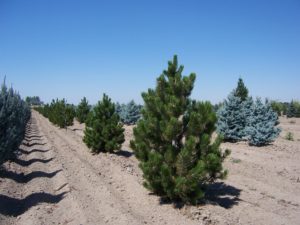 Bosnian Pine is a popular ornamental tree in parks and large gardens, giving reliably steady (though not fast) growth on a wide range of sites.  Neat, conical crown with very decorative purple cones in their youth.  Very tolerant of severe winter cold and wind exposure.

The Jeffrey Pine has bark that is deeply furrowed and reddish-brown compared to the orange color of the Ponderosa Pine.  Many say it also has a strong vanilla or pineapple odor.  The needles are blue-green and longer than the Ponderosa Pine, but the overall look is similar. 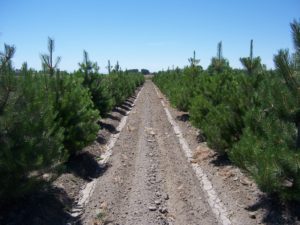 Austrian Pines are pyramidal and dense when young becoming flat-topped, with wide spreading branches as it matures.  The dark, shiny needles are moderately long and in bundles of 2.  Deeply furrowed bark is almost black.  Austrian Pines will perform well in ordinary to poor soils. 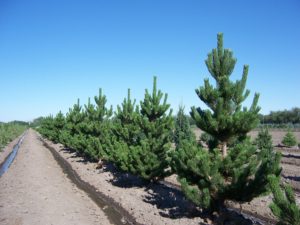 Also known as the Western Yellow Pine.  Thrives in poor soils and is somewhat salt tolerant.  Good for naturalizing, specimens and windbreaks.  The Ponderosa Pine has very distinct orange bark with black lining the deep furrows.  This tree can often be identified by its characteristic long needles that grow in bundles of two and three.  A good over-story tree.

Young Southwestern White Pines pyramidal shape matures into a layered, more broad form.  They have low to moderate water needs and are drought tolerant once established.  Full sun and well-drained soil is preferred.  Southwestern White Pines are an attractive evergreen with flexible, blue-green needles that contrast nicely with the smooth, silver-gray bark. 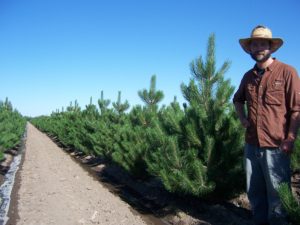 A well-branched, fast growing conifer with stiff, bluish-green needles.  Beautiful, reddish-brown bark and cones.  The spreading branches create an interesting conical to rounded evergreen that is very picturesque in the landscape.

Theme by Anders Noren — Up ↑